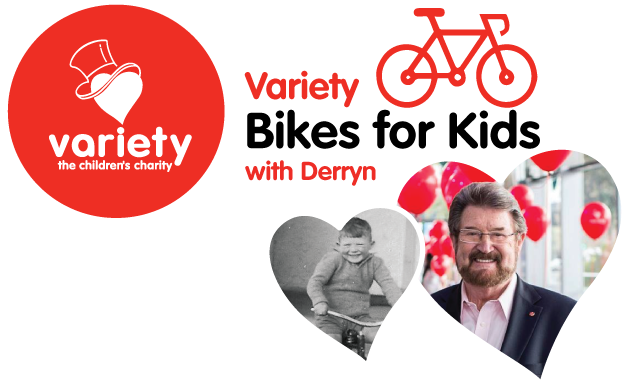 Variety Bikes for Kids is one of our longest running programs - celebrating 18 years in 2020! Learn more about this incredible community initiative and how you can get involved today!

What new ways can I show kindness and support the Variety Bikes for Kids program this year?

Things look a little different this year and we've got lots of new ways you can show kindness and help out! To start with, we're crowdfunding for $43,600 to provide bikes, helmets and locks to more than 200 kids for the very first time! Make a personal gift, leave a message of support on the page and share with your friends!

You can also share the kindness even further by starting a community fundraising page to support Variety Bikes for Kids as an individual, a team or an organisation. These special pages provide you with a hub to set your own fundraising goals, tell your story about why you are supporting Variety Bikes for Kids, share updates and send to your friends, family and workmates.

If you are an organisation we can even set up a matched giving program for your staff and arrange special volunteering opportunities. Please feel free to contact Jess on [email protected] for more information.

What inspired Variety Bikes for Kids?

One of the very special memories in my life during that period was my dear parents, who saved up all year to make their son’s dream come true.

I was about ten when I got my first bike. I had worked hard at weekends and before school on my father's milk run. I thought I might be rewarded with a bike for Christmas. On Christmas morning I got home from the milk run and was disappointed there wasn't a bike under the tree.

But I did get a bike that Christmas. My parents had hidden it at the end of a long piece of string. I followed the trail down into the basement. And there it was. And when I saw it, I looked at it and I cried.

I didn't care that it was a second-hand bike. Didn't care that the peeling chrome handlebars had been gussied up with that silver paint they used to smear thickly on the old coal range. It was my bike! And it meant the world.

That act of kindness from my parents has stayed with me and informed the way I have lived the rest of my life.

Despite changing times, the Variety Bikes for Kids mission remains consistent: to give the gift of independence and joy to children who have never been fortunate enough to have a bike of their own. Since I started this campaign 18 years ago, together we have raised over $2.5 million and granted 12,000 bikes to kids living with disadvantage. It’s such a special campaign, and I’m so proud you and I are a part of it.

How did the Variety Bikes for Kids Program start?

Now in it’s 18th year the Variety Bikes for Kids program was the brainchild of Variety past Chair, Life Member and Ambassador Derryn Hinch.

Reflecting on how much his very first bike meant to him, under difficult financial circumstances for his family, Derryn campaigned to make sure all kids can enjoy the freedom of a bicycle.

In 2002 Derryn started a radiothon on 3AW that ran for 10 years. Since then the annual appeal has delivered over 12,000 bikes for kids.

The Variety Bikes for Kids program is particularly unique as it allows supporters to personally see their impact through their attendance of a special event with Derryn, where they can hand a bike directly to a child.

"The Variety Bikes for Kids program is the epitome of what my favourite charity does best – providing tangible equipment with a direct impact on the quality of life of local children in need. An impact that both you and I get to see firsthand. My own family struggled through hard financial times. Like all parents, my mum and dad wanted the best for me. That’s why they did everything they could to give me the joy of receiving my very first bike - something I’d always dreamed of." Derryn Hinch

Will I be able to handover a bike this year as part of a special presentation?

We'll be following State government advice as to whether the Variety Bikes for Kids in person presentation will go ahead this year.

This year, in case our donor event can’t go ahead due to restrictions, we’ll be delivering bikes to schools and homes – I’ll even be delivering some myself! And I’ll make sure I share those special moments with you.

Derryn Hinch was Variety Victoria's second ever Chairman, after Paul Hogan brought the charity to Australia in 1975.

Derryn became part of a long line of entertainers who support this very worthy cause.

You may also be familiar with the Variety logo which includes a heart to represent "the heart of show business" and top hat representing an era of entertainers when Variety began in 1928. Well Derryn made that logo! Sketched in a restaurant and now adopted by Variety worldwide.

"Variety is all about heart, and a love of helping children who are less fortunate. That is what I had in mind when I sat down at a local restaurant and sketched out the Variety hat and heart logo you see now. Little did I know that my heartfelt sketch would be adopted internationally and is now used by every Variety office across the globe!" says Derryn.

How has COVID-19 affected Variety - the Children's Charity?

2020 started with the passionate team of staff and volunteers at Variety – the Children’s Charity doing what we do best - responding to kids and families in need.

We rallied to support fire effected communities, granted equipment and resources for kids across Victoria and planned to deliver events and fundraising activities throughout the year to ensure all kids have a fair go in life.

We all know what happened next…

COVID-19 and the associated government restrictions changed our lives.

Like many organisations seeking to keep people well, flatten the curve and comply with government requirements, Variety’s core activity of running events and fundraising to support children has been put on pause, significantly reducing our income. At the same time we saw a surge in demand for equipment and assistance from families.

We thought about not running the Variety Bikes for Kids appeal this year, because we know people are struggling. But we also know, from surveying and speaking to our Variety families, that they are doing it tougher than ever, and that an act of kindness and joy will mean more than it ever has before.

Am I able to donate a second hand bike?

Thank you for such a generous thought! Variety - the Children's Charity want to ensure the safety of our kids is paramount so we purchase brand new bikes from Anaconda that are safety checked after assembly by a mechanic. If you have a second hand bike you would like to donate you can contact organisations like The Bike Shed at CERES.

What else does Variety - the Children's Charity do?

We believe all kids deserve a fair go. So, whether it’s kids who are sick, disadvantaged or have special needs, Variety helps kids who miss out on what they need to join in with everyone else. We assist through the provision of grants for life-changing equipment, scholarships for kids who need a little extra help to nurture their talents, education initiatives like the Variety SHINE Program and kids events to bring joy like the annual Variety Kids Xmas Party.

With a broad reach of support, Variety can provide assistance to the cause you are most passionate about. We research need and work to meet the gaps where others can’t help or where there are long wait times for urgently required equipment. Variety give where the money is raised so you have the assurance that local kids in your area are living their best life thanks to you support.

We’re often referred to as the ‘Variety family’ by those who we help – we pride ourselves on being APPROACHABLE, warm and friendly, KIND, big hearts, always open and INVENTIVE, pioneering new ideas. AND we know how to have FUN while fundraising to bring JOY into the lives of as many kids as possible. We have profound relationships with some of our Variety kids, who’s families know we are there for them as their children’s needs change as they grow and develop over the years.

We have an expert Kids Support team who work directly with our families and organisations. Those we assist, know that we are just a phone call away. We check in and make sure we know what our community needs and have a passionate and dedicated fundraising team to keep you in the loop and ensure you get to see the impact of your investment into the future of kids in need.

We make sure you get to see your donation at work, whether it be attending our Variety Bikes for Kids presentations, seeing your card being handed to a child with a gift you funded at Christmas time or seeing your fundraising dollars at work on the road during one of our famous motoring events.

How does a bike benefit kids?

Cycling in childhood has lifelong benefits:

With kids lives in lockdown impacting exercise and learning already challenged with the home schooling crisis, kids need physical activity more than ever. You can help out!

How can I help as a company?

Here are some creative ways you can help:

This year we are aiming to raise $43,600 to provide 200 bikes for kids living with disadvantage. We would love to see you take part to make this dream a reality. If you’d prefer you can still make an individual or company donation. You’ll receive an instant tax receipt, and of course all donations over $2 are tax deductible. So please, don’t hesitate to reach out and let us know how you would love to be involved in Variety Bikes for Kids this year. We can’t wait to work with you!

How do people sponsor my page?

Supporters can sponsor and donate to you / your team directly through your fundraising page. This will be set up as soon as you sign up. Alternatively, if you'd like to make a single donation, just click the donate button on the top of this page.

How do I set up a team of individual fundraising page?

When you click the FUNDRAISE button to sign up, you'll be given two options - set up as an individual or a team/organisation. Choose what suits you best! If you set up as a team or organisation, you can invite your friends, family and workmates to join you - their individual fundraising will all go toward the team page total.

We're here to answer any questions you have and help you with your kind gift, fundraising and to provide ideas and support to individual and corporate supporters. Please don't hesitate to reach out on (03) 8698 3900 or via email below.